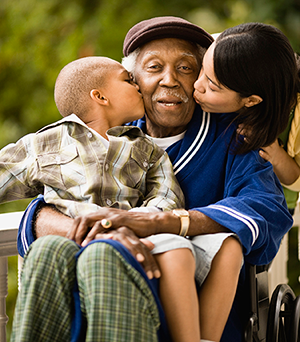 Alzheimer’s disease is the most common form of dementia, affecting an estimated 60-80 % of people diagnosed with dementia. According to the Alzheimer’s Association, “Dementia is a general term to describe the symptoms of mental decline that accompany Alzheimer’s and other brain diseases.” Although the symptoms of dementia vary by the causative disease and areas of the brain affected, all forms of dementia may share some common symptoms.

The early stage may include:

The middle stage, which is usually the longest, may include:

The late stage may include:

At this time there is no cure for Alzheimer’s disease. Treatment and support is geared toward symptom management. This often involves a multidisciplinary approach.  It is important to discuss all questions and concerns with a health care provider who specializes in treatment of Alzheimer’s disease.

The National Task Group on Intellectual Disabilities and Dementia Practices (NTG) promotes the use of the NTG-Early Detection Screen for Dementia (or NTG-EDSD). The purpose of the NTG-EDSD is to offer family and professional caregivers a resource to record their observations regarding changes in areas of cognitive and adaptive functioning known to be associated with dementia. The intent is that caregivers will use the information captured on the NTG-EDSD to begin a dialogue with health care practitioners and that it will serve as an aid to shared decision-making.